Many people make new year resolution for the coming year.

My focus and research was on anti-aging and anti-inflammation; this month I researched common foods which causes inflammation

For me the tough one to cut down is sugar, since I LOVE sugar. I did some research on "Sugar and Health" and saw on You Tube that sugar is toxic - 60 minutes (I strongly recommend watching http://www.youtube.com/watch?v=6n29ZIJ-jQA); I also read medical studies and realized sugar is a serious one to cut down.I have a very high LDL cholesterol in spite of eating pretty healthy. I am also thin, so weight is not a concern of mine; for me it's the opposite - - I look for way to gain weight. My downfall is I can eat a pound of See's candy (did I say eating pretty healthy?!) and not feeling guilty. But after I watched a video it occurred to me that maybe my high LDL cholesterol is directly related to my high consumption of sugar. Study shows sugar is the cause of LDL and even feeding CANCER CELLS! Sugar is highly addictive (tell me about it).

According to 60 minutes TV show: A study by neuro-scientist Eric Styce, he used MRI scans to evaluate what happens in the brain when people eat sugar, sugar causes stimulation of the reward centers in the brain

similarly to how cocaine or other drugs work. This principle only applies to added sugars, NOT moderate consumption of fruits (which are real foods with fiber, water and a low energy density). It's almost impossible to overeat when it comes to fruits, except perhaps for those who are diabetic or very carbo sensitive. Fruit juice is an exception and should be avoided, it contains just as much sugar as a sugar-sweetened beverage. Also be aware that “healthier” sugars like agave and organic cane sugar are just as bad as regular sugar.

In his opinion, the single most important change anyone can make to their diet is to cut back on added sugars.

Another study by Kimber Stanhope also on 60 minutes, informs us that most carbohydrate foods like bread, rice and potatoes contain starches, which are polymers of the monosaccharide glucose. In other words, too much bread, rice or potatoes has the same effect as sugar. Glucose is part of the metabolism of every cell on the planet. Without it, life would not be possible. If humans don’t get any glucose from their diet, they produce it.

Keep in mind that sugar contains glucose and fructose, glucose is metabolized almost exclusively by the liver. When the liver is already full of glycogen and becomes overloaded with fructose, it turns a large part of it into fat. After a 10 weeks study, the fructose group had

• Increases in small, dense LDL, apoB and oxidized LDL, indicating an increase in

the risk for cardiovascular disease.

• Increased fat in the abdominal cavity, the visceral fat that is highly associated with

Of course, the fructose dose in this study was fairly large (25% of calories) but the effect it caused was very dramatic and quick. It is quite likely that a lower intake of sugar, consumed over a longer time period (many

years) could have the same harmful effects.A cardiology Mehmet Oz, MD's book "You on a diet" book mentioned that the average person consumes 150 pounds of sugar per year - compared 7 1/2 pounds consumed on average in the year 1700. After I spent some time researching for "Why sugar is harmful?" Without hesitation I threw away the remaining See's candies that I had received as a holiday gift. The video I watched shows the visible effects of sugar in our body and it really changed my attitude toward sweets. I used to say Sugar is good for my soul but I was wrong. I remember in the Bible, Abraham's wife Sara was so beautiful at age 65 that an Egyptian official for King Pharaoh's saw her and noted she was a very beautiful; they praised her to Pharaoh. Of course 2,000 years ago they did not have the pollution problem, nor the ozone layers destroyed. Yet I thought to myself - - maybe Sara did not have sugar in her diet and that is her beauty secret?! No sugar means less inflammation. Remember, Anti-aging is Anti-inflammation. Health is the most beautiful thing! 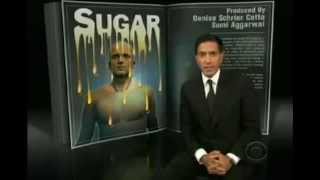